Building near a tree root

Building around a tree can be a little scary, especially if you don’t want to compromise it. But if you have the right information and resources, you can do the work without much of a hassle.

If building an outdoor living space is in your plans, there are a few things that you should keep in mind before getting to work.

The most important one is the tree canopy. This is basically the area surrounding the tree trunk that’s covered by branches and leaves and provides shade. Ideally, one would avoid pouring concrete near it, because that can increase the risk of compromising the tree and its roots. However, if you’re living in an urban area, this is pretty unrealistic, given the reduced space.

Still, pouring concrete —or any other type of permanent material, for that matter— isn’t a great idea. The roots could always grow, shift around and crack the surface over time. This, aside from damaging the concrete, can seriously compromise the root and the whole tree. And, if the tree is leaning to one side, the roots are at greater risk.

You’d also need to keep in mind the root’s sensitivity. The more sensitive they are, the easier it would be to jeopardize them.

So, what exactly can be done to create a landscape?

Well, every situation is unique, but there are a few materials that could be used, that vary in shape, price, and size. You can find the best that appeals to you and your aesthetic goal.

Here are some ideas:

If you want the surface to look as close to concrete as possible, pavers are the ones for you.

They will create a nice leveled area and can be moved around and re-set as much as needed, even if the roots start disrupting them.

Just keep in mind that they are still heavy and could push down on the roots. Also, if you’re doing traditional pavers, you’re most likely going to have to dig a decent amount of soil in order to place them. You would have to be very careful, so as to not interrupt the root and compromise it. Plus, when laying pavers down, you also need to place a class 2 base —which is basically ¼ inch gravel, sand, and dirt— and compact it really well. This can make it hard for water to move through.

The solution for that would be to limit the amount of hardscape —the non-living elements in landscaping— around the tree, leaving more room for the softscape.

Gravel in general would create a more irregular area. Not as leveled as pavers, but it’s a lot better if you don’t want to mess too much with the roots.

Just like the pavers, it would pretty much allow the roots to move as much as they want. The difference is that you won’t need to shift them around yourself. It’s also a lot less invasive and it will allow water to move down and reach the root. And it’s cheaper!

It’s also very easy to clean leaves that fall off the tree, either by picking them up or using a blower to do all the job.

Gravel also gives you the opportunity to add moisture to the area. If you are living in a rather dry area, this is great for the tree. However, you need to be careful with that causing rot and/or fungus. It’s not too common, but it would be good to keep an eye on that.

That being said, although gravel is not as heavy as a paver, it can get heavy if you put on too much. The more you add, the heavier it gets, and it can get to the point of not letting the water run through. Also, it can hold heat and make the soil even warmer, especially if it’s in full sun.

This one is a combination of gravel and pavers. You can achieve a leveled surface and it lets the water run through a lot easier!

A deck is also less invasive; you’d only need to dig on specific places for the posts to pierce. If you’re careful, you can do so without disrupting the root. You can also leave a space between the deck and the ground, so it lays above the roots, not directly on them. They would have the chance to move and grow as much as it wants without having something heavier pressing on them.

Despite all this, there is one thing you need to keep an eye on. Just like the gravel, moisture can get trapped underneath, causing rotting. However, it is also not as common, especially because a deck can allow good airflow.

The most cost-effective and least invasive of all the options. It’s also really easy to get; you can get it for free from chipmulch.com or your local landfill.

Another cool thing is that, since it’s a natural material, it decomposes into the soil, adding nutrients! Just like the gravel, it allows the roots to move, but given that mulch is not heavy at all, it won’t press down on them, nor hold heat.

Just keep in mind that it’s the most informal-looking, so you’d need to find a fitting aesthetic for this one. 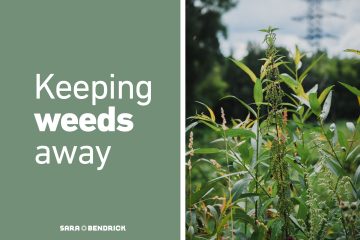 Keeping weeds away from your yard 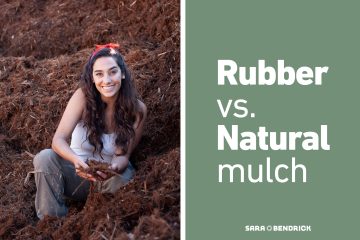